Exploring the difference between engagement and outreach was one of the most important lessons I learned from Vijay. 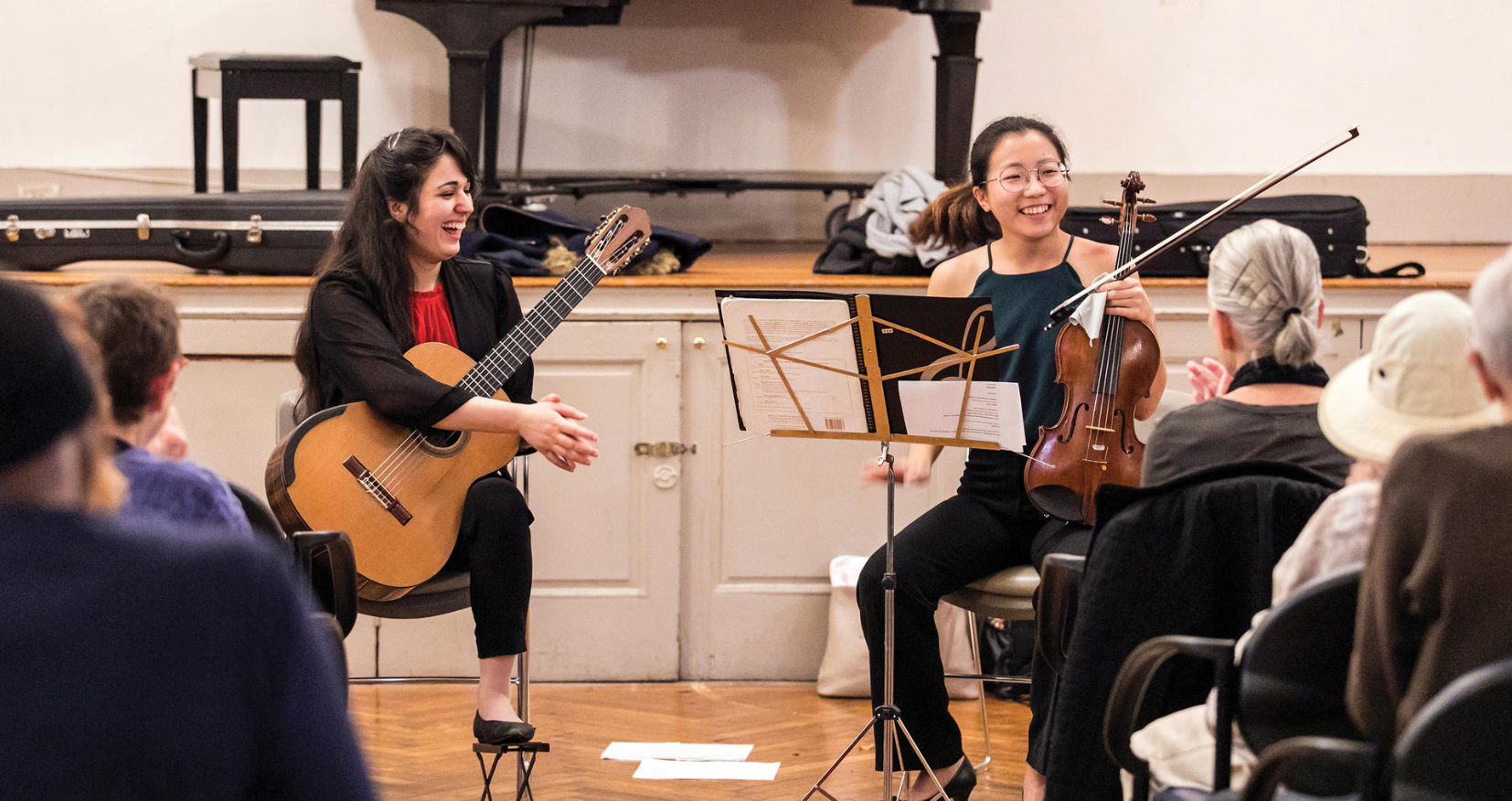 In early November, as part of their Gluck Community Service Fellowships, master’s students Alberta Khoury (BM ’17, guitar) and Yin-Ying Tseng (BM ’17, viola) performed at a homeless shelter. But while the Gluck fellows (there are 106 this year) perform regularly in pediatric centers, nursing homes, homeless shelters, and other venues all over the five boroughs, this performance was a little different. That evening they were joined by President Damian Woetzel and violinist and social activist Vijay Gupta (Pre-College ’02), who was in the midst of a mini-residency at Juilliard. Gupta had recently been given a MacArthur “genius” grant for his work co-founding the Street Symphony in Los Angeles.

It was a huge surprise when I learned Vijay Gupta would be working with my Gluck group—Yin-Ying Tseng and me—and we had so much fun preparing for our performance at the shelter. Exploring the difference between engagement and outreach was one of the most important lessons I learned from Vijay. Showing up and performing in a venue is one thing; engaging with the venue and audience is another. As Vijay said, being there is enough. But transforming the occasion into a dialogue between audience and performer takes everything to a magical level. It was wonderful seeing how Vijay captured the audience’s curiosity and excitement and watching them explore the music with him as he played selections by Bach and other composers. Engaging the audience with questions is crucial. Discovering how the audience members feel, learning about the images or stories they imagined from the music, and hearing about their experiences and memories taught me so much about being in the moment. I learned how to let myself feel vulnerable and sensitive no matter how intense or awkward a moment might feel. I really enjoyed engaging with the audience and asking questions and hearing such different answers. It was wonderful seeing the audience sing selections from musicals and clap to a Klezmer dance we played. And after we played Jacques Ibert’s Entr’acte, an audience member described it as a “mix of emotions.” Hearing that changed my way of thinking about the piece. Originally, it had seemed virtuosic and exciting, but after he made that comment, nuances and gestures began to shine and modulations, phrases, and gestures came to life. Among other things, this experience revealed how bringing less material to a program and digging into one piece at a time has an impact. 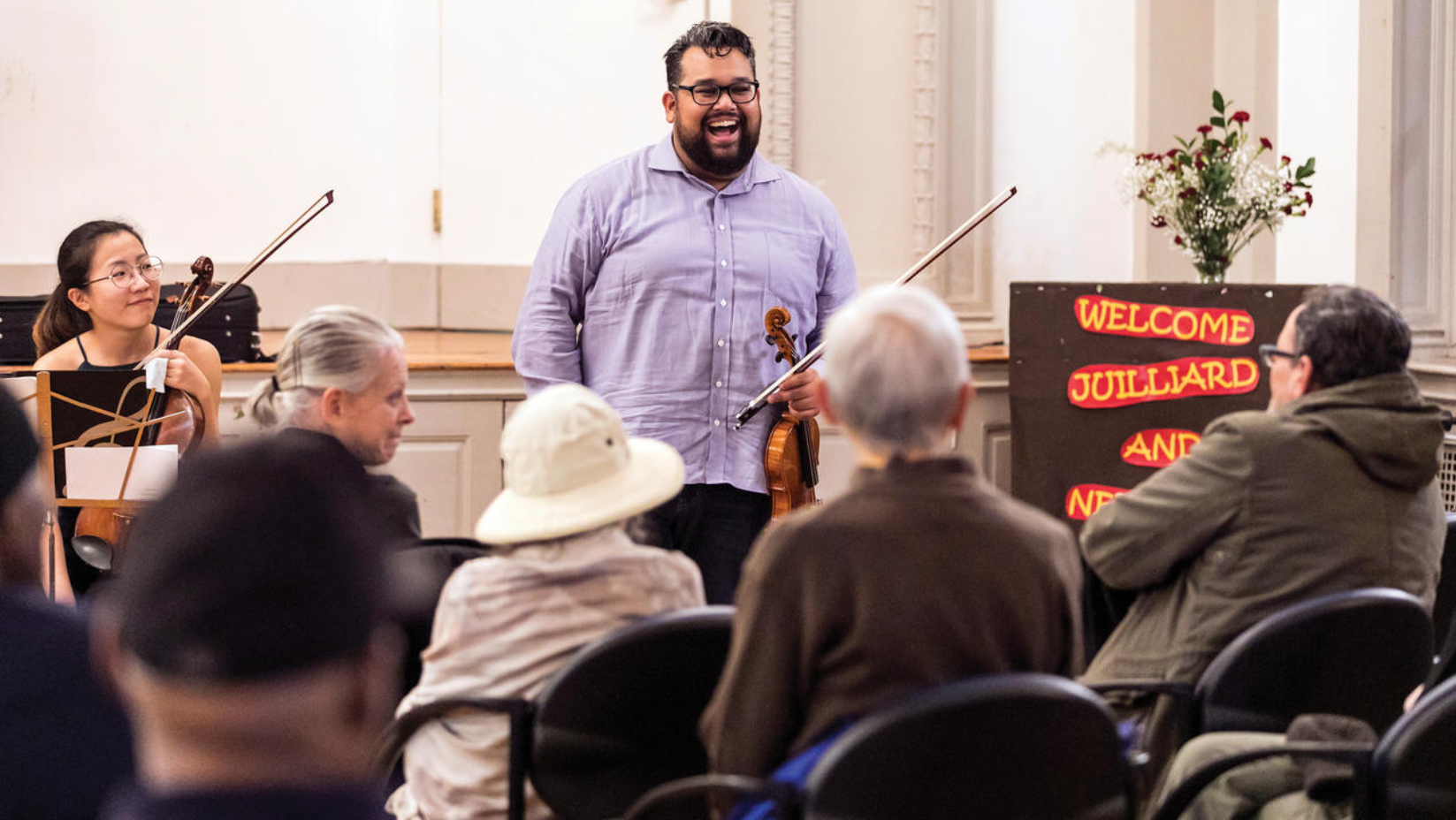 Another incredible aspect of that evening was observing Vijay playing music for and talking with audience members before the concert began. I loved seeing how a performance doesn’t need to start with the first note on the stage. The act of connecting with the audience deeply reminded me of performing in my hometown, Sydney, Australia, last summer. Volunteering to perform in a hospital, a library, and a cancer center put me in touch with so many people. By sitting closer to the audience and engaging, I discovered who I was playing for and how individual and unique each person was, which highlighted the Office of Community Engagement’s encouragement to be mindful of the world around me. I’ve participated in engagement programs throughout my years at Juilliard, and this advice and encouragement to each of us to discover our own voice and, as Vijay put it, realize we are enough, has changed my life. During his time at Juilliard in November, Vijay created many different kinds of atmospheres with his words, artistry, and presence. During his visit to President Woetzel’s Arts and Society class and in a public panel discussion the two of them had in Paul Hall, I was inspired by the way Vijay could answer questions and share his ideas. Barriers were broken, hierarchy dissipated, and audience members felt at ease. I think many people, like me, couldn’t wait to share their ideas with him, and it was incredible to see those ideas take shape and grow from all his perspective and advice.

Alberta Khoury is a classical guitarist currently studying at The Juilliard School with Sharon Isbin.